White, tooth colored fillings are the standard procedure offered at Pearl Dental Arts for the treatment of tooth decay (dental caries). Teeth that develop cavities have to have the decay removed as soon as possible and then filled. Traditionally, the fillings placed by dentists to fill cavities were silver fillings.

Silver fillings, or amalgam fillings, are a combination of silver, mercury, tin and copper. They were used by dentists for filling cavities for over a 100 years. They did, however, tend to discolor with time. So patients now prefer the natural tooth colored fillings, also called resin or composite fillings.

With the advance in the physical properties of the resin filling material, the tooth colored fillings can be used for front teeth as well as back teeth, and come in many shades that can be matched to a person's natural teeth shade. They do not hold up as well as the silver fillings and may need to be redone after a few years.

(ii) drilling out the decayed portion of the tooth

(iii) applying a thin layer of a dental bonding agent that enables the composite resin (tooth colored) to be chemically bonded to the cavity walls of the tooth. A white light is mostly used to help the white filling material harden inside the cavity.

(iv)the bite is checked and the new filling is polished

There is a belief among some that silver amalgam fillings are harmful to one's health, and they get old silver fillings removed and replaced with white fillings. The American Dental Association, The US FDA and several scientific bodies have said that the mercury in the silver fillings poses no health hazards, and the preference for white, tooth-colored fillings should be based entirely on esthetic considerations.

At Pearl Dental Arts, Dr. Abid Paghdiwala has been placing white tooth colored fillings for many years  and does not charge the difference between the insurance fee and dentists'  fee for white fillings. 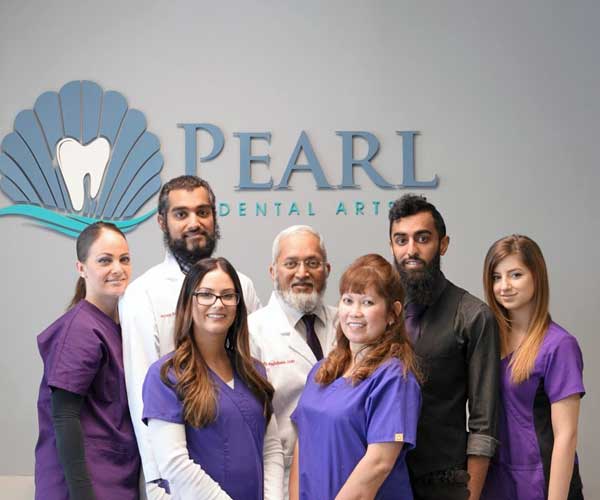 Dr. Abid Paghdiwala has been perfecting the art of dentistry since 1981 and has helped many patients achieve healthier, better-looking smiles through personalized, gentle, and state-of-the-art care. He is a member of various notable organizations, including:

To schedule a consultation at our office in Levittown call us at 215-949-8000 or request an appointment online.

*Disclaimer: results are not guaranteed, may not be permanent, and can vary per individual. Some images are of models, not actual patients.